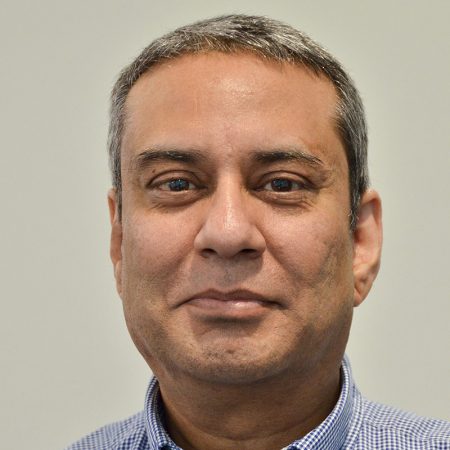 Sheetal Handa is bp’s Materials Science Advisor and the previous Associate Director of ICAM. In this role he also upholds bp’s relationship with UKRI. Sheetal has held roles both in academia and industry and currently holds an Honorary Chair in Materials Science at The University of Manchester.

He was a member of the team that developed the case for the bp International Centre for Advanced Materials through to its launch. In 2013 he was appointed Research Programme Director for ICAM and in 2017 the Associate Director.

He joined bp in 1997 and has held a number of technology related roles across the different bp businesses, including as the Organic Chemistry Consultant, Technology Portfolio Leader for the Upstream Projects Technology Unit and was responsible for delivering a diverse R&D portfolio including production chemistry, deep-water, LNG, engineering and pipelines.

He joined bp Legal in 2002 to be the IP Advisor for bp Group. Here he negotiated a range of large research and development collaborations and licensing deals including Technology Collaboration Agreements in seismic, MEOR.

Previously Sheetal held an academic position in the Department of Chemistry at King’s College, London from 1993-97 and built up a research group investigating bio-mimetic catalysts and enantioselective synthesis of natural products.

Before King’s he held scientific leadership positions in Shell Research. Here he led a team discovering and developing biocatalysts for organic synthesis and developed novel bio-mimetic catalysts for oxidation. He then spent three years as a senior scientist in Shell Agrochemicals and led a team developing scale up routes for Shell’s agrochemicals.

Sheetal’s graduated in Chemistry from King’s College,
London in 1982 and completed his PhD in organic synthesis (Synthetic Opiate Analgesics) also at King’s in 1985. He then went on to a postdoc at Duke University in North Carolina in developing enantioselective synthetic methodologies using carbohydrates. This was followed by a postdoc at Cambridge under Professor Sir Alan Battersby FRS in vitamin B12 biosynthesis. He is a Fellow of the Royal Society of Chemistry.